Vietnam jails activists for subversion amid crackdown on dissidents 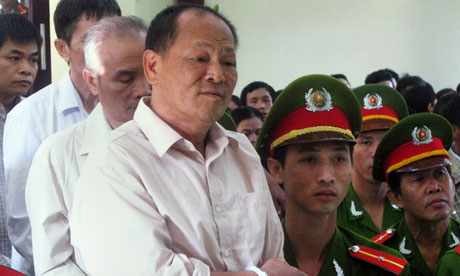 A court in Vietnam has sentenced a man to life in prison and given jail terms of up to 17 years to other defendants after they were found guilty of “subversive activities”, according to the state-run Vietnam Television.

The verdict follows a series of harsh punishments handed down for dissent in the communist-ruled country, at a time of reported political infighting among the leadership centred on how to reform the economy and tackle management problems at big state firms that have led to bad debt.

The people’s court of Phu Yen province gave a life sentence to Phan Van Thu, head of a group that wanted to establish a new government in Vietnam, the television station said in a news bulletin.

Jail terms of between 12 and 17 years were handed to others in the case, the television station said without elaborating. “Their action has seriously violated the laws,” it added.

People’s Police newspaper, run by the public security ministry, said Thu and others had joined forces in a tourist resort in the central province of Phu Yen from 2004, printing anti-government documents until their arrest in February 2012.

Thu had spent time in prison for anti-government activities in the late 1970s, the newspaper said.

In January, 13 political activists were found guilty of anti-state crimes and sentenced to prison, a ruling condemned by rights activists as part of a crackdown on dissidents.

“The Vietnamese government is systematically suppressing freedom of expression, association, and peaceful assembly, and persecuting those who question government policies, expose official corruption, or call for democratic alternatives to one-party rule,” the report stated.

The government has made no comment on the report.

Among other cases, on 24 January security forces detained a blogger in the northern province of Hung Yen and sent him to a mental institution, according to a letter to Vietnam’s leaders from the Paris-based Vietnam Committee on Human Rights.

Last week, the authorities deported Nguyen Quoc Quan, a US national of Vietnamese origin, after keeping him in prison without trial since April last year.

Quan was accused of subversion and of being a member of Viet Tan, an outlawed pro-democracy group based in the US, the Communist party newspaper Nhan Dan wrote.

Quan’s trial, which had been scheduled for 22 January, was dropped, He was freed on 30 January, the Viet Tan group said.