To bait the EVFTA: Vietnam amends its Labor Code

The Vietnam’s regime allegedly revealed “a secret” in the process of revising the Labor Code to ensure employees’ rights and freedom on association, following the requirements by the EU-Vietnam Free Trade Agreement (EVFTA). 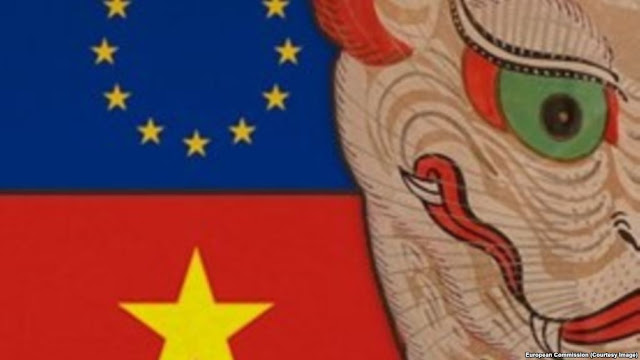 The Standing Committee of the 14th National Assembly opened its 33rd meeting in Hanoi on April 10th under the chair of NA Chairwoman Nguyen Thi Kim Ngan right after her official trip to France and Belgium at the end of March 2019.

NA Chairperson was disappointed that she has not received the draft revised Labor Code which was planned to complete in 2019, SGGP reported. She said: “Vietnam has pledged to revise the Labor Code to EU Parliament in accordance with its international commitments and free trade agreements. The compiling agencyshould have now finalized the amended draft Labor Code, but instead of that it tends to ask for opinions of The National Assembly Standing Committee (NASC) concerning the issues. Is it not a reverse process?”

Her statement certainly revealed that since the end of 2018, there has been no progress in the amended Labor Code to match Vietnam’s commitments to EU-Vietnam Free Trade Agreement’s requirements.

Both the CPTTP, and the EU-Vietnam Free Trade Agreement (EVFTA), include specific requirements on labour rights and work conditions according to the International Labour Organisation (ILO).

At the end of 2018, for the first time Nguyen Phu Trong and his regime had to yield. They agreed to free unions which will present and ensure workers’ interests. That means independent labor unions will be recognized and operating together with the Vietnam General Confederation of Labor (“VGCL”) in many levels. Moreover, different independent labor unions in different places can connect with each other without any limits.

To bait the EVFTA

Should Vietnam not amend its Labor Code, the EP will not approve EVFTA. Therefore, at the end of 2019, The Ministry of Labour, Invalids and Social Affairs (MOLISA) issued the draft amendment of Labor Code, including some amendments. The Vietnamese government planned to submit Labor Code drafts to the National Assembly in May, gather feedbacks until June 28, and estimate final approval in congressional meeting in October 2019.

However, the vague terms and contents of the amendment Labor Code do not meet all EVFTA requirements.

As both CPTPP and EVFTA use the term “ free unions” to describe the right to freedom of association,  the draft law choose the term “ representative organizations of workers”. With this vague term, workers would think that free unions (or independent unions) are also under the umbrella of VGCL; and therefore, they will not want to form any other free unions.

The amendments do not prescribe or do not prescribe presicely the labor rights as those in CPTPP. The Articles mentioned that: –Workers are allowed to establish their own representative organization of their choice. To operate legally, the representative organizations at the enterprise shall legally establish and operate after joining the VGCL system or registering with the competent authorities”.

–The representative organizations of workers at the enterprise are as equal as traditional unions operating under the umbrella of VGCL.

–The local representative organizations of workers at the enterprise an obtain supports and training from registered/official organizations in Vietnam.

–The supposed roadmap should be completed in 5 to 7 years at the latest after CPTPP being effective; the local representative organizations of workers/local unions at the enterprise can join or form any higher levels regarding sectors or areas.

The Labor Code drafts mention some new aspects of labor rights such as strikes. The current legislation allows workers to go on strike at workplaces, to organize strikes to resolve problems which conflict with workers’ collective interests; but CPTPP’s policies allow workers to organize sectoral, sympathy strikes, and possibly strikes “to protest economic and social policies”.

The drafts does not elaborate on the “competent authorities” and that would confuse workers about where to register their own unions. Hence, they might likely keep depending on VGCL despite the fact that VGCL receives 3% of their payroll in line with the Law on Trade Unions.

Giving the perfundtory of the draft Labor Code, the Vietnamese’s one-party-regime issues the amendments as its attempt to fish the EVFTA. And once the law is enacted, the workers will be worn out due to the complicated administrative procedures, and their independent unions will be failed to register.