Trang chủ > Genera news > US - Vietnam human rights dialogue 2019 will not be zero?

US – Vietnam human rights dialogue 2019 will not be zero?

Vietnam’s one-party authoritarian regime will host the bilateral human rights dialogue between Vietnam and the United States government scheduled in May 2019. The Bureau of Democracy, Human Rights and Labor Affairs (DRL) delegation will be meeting Vietnam’s civil society representatives in advance of the annual dialogue.

Two years ago after U.S.-Vietnam Human Rights Dialogue 2017, Acting Assistant Secretary of State Virginia Bennett met up some prominent dissidents in Saigon at the premise of Consul General Mary Tarnowka. Virginia Bennett informed hopefully and excitedly the outcomes of the annual Dialogue.

In the meanwhile, more than 20 police officers prevented Dr. Nguyen Dan Que, the founder of a pro-democracy group called the High Tide of Humanism Movement and former political prisoner who was imprisoned 20 years, from leaving his house to meet the U.S. Delegation. 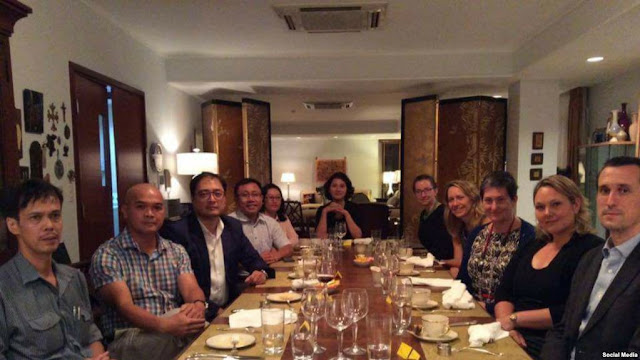 Virginia Bennett was new to the position and likely not familiar with the tricks of Vietnamese’s leadership. Bennette received false promises from Director General of the Department of International Organizations in the Vietnamese Ministry of Foreign Affairs, Pham Hai Anh, who repeated annually the same false commitments. And since then there were few achievements in Vietnam’s poor human rights records.

During the meeting with President Trump in May 2017 in Washington D.C., Prime Minister Nguyen Xuan Phuc received little results on trade deals but complaints on U.S. trade deficit. And President Trump made no mention of Vietnam’s human rights abuses. After that, around 30 activists were arrested, convicted, and received heavy sentences.

Nguyen Bac Truyen, a religious activist and one of the dissidents visiting Consul General Mary Tarnowka’s during the trip of DRL delegation in Saigon, was arrested and charged 11 years jail in 2017.

It seems that Virginia Bennett was not as lucky as her predecessors, Daniel Baer, and Tom Malinowsky.

Under Barak Obama administration, U.S.-Vietnam Human Rights Dialogue led by Daniel Baer and Tom Malinowsky in 2013 and 2014 delivered better results. Vietnam had released 12 prisoners of conscience, among them were Nguyen Phuong Uyen, Do Thi Minh Hanh, Cu Ha Huy Vu, Dieu Cay Nguyen Van Hai, Ta Phong Tan. It was the Vietnamese regime’s attempts to bait the Trans-Pacific Partnership deal (TPP) due to its economic crisis and lack of budget.

The trip of Bennett to Hanoi amid somber situation-Trump’s withdrawal from TPP trade deal. Vietnam allegedly was was no longer the country that could gain the most benefits from the deal. Since the grapes were sour, Vietnam’s regime intensified crackdowns against dissidents and rights activists.

Hence, the U.S. allegedly had to stop the human rights dialogue which should have been held twice a year.

Tension had escalated when China deployed hundreds of Chinese coast guard and Navy vessels to Vanguard and Red Emperor. As a result, Vietnam was defeated in its own home when it had to cancel the oil and gas project assigned to Repsol.

The real reason for Vietnam’s tilt toward America was to deal with China’s intimidation at sea and oil but not to improve human rights situation. Moreover, President Trump does not prioritize human rights.

America could have hold if they wanted to

There was no result from the annual human rights dialogue in 2018 either. Vietnam had released blogger Nguyen Ngoc Nhu Quynh and dissident Nguyen Van Dai into exile after receiving a positive signal for the Europe-Vietnam Free Trade Agreements (EVFTA).

During the U.S.-Vietnam Human Rights Dialogue 2019, it appears that the Americans learned their lessons and was harder toward the Vietnamese.

Unlike 2017, the U.S. now has the upper hands when Nguyen Phu Trong can finally pay an official visit to Washington as the president of Vietnam.

At the meeting between Trump and Trong, U.S.-Vietnam defense cooperation will definitely be highlighted in the agenda and that might lead to a Mutual Defense Treaty which is similar to that of the Philippines and the U.S. Beijing will not be happy and surely will try to hinder that.

The second highlighted cooperation is the trade of goods which would bring up to $35 billion for Vietnam and so much more only if Nguyen Phu Trong is strong enough to make the trip.

Trong did not to meetU.S. Senator Patrick Leahy and his delegation but his right hand, Tran Quoc Vuong. The visit of SenatorLeahy is said to be very important for bilateral cooperation and Trong’s trip to the U.S.

The U.S. senators mentioned Tran Huynh Duy Thuc and 6 other prisoners of conscience in the meeting with Vietnam’s top leaders. They also asked about Micheal Phuong Minh Nguyen, a Vietnamese-American, detained in Vietnam for “activity against the people’s government”.

If Trong could meet Trump in summer 2019, the outcome could be the same as that of the meeting between President Obama and President Sang in July 2013. President Sang visited the U.S. to discuss TPP trade deal. Three weeks after the meeting, Long An’s Court freed student activist Nguyen Phuong Uyen who was serving a six-year jail term.

Therefore, the result of the U.S.-Vietnam Human Rights Dialogue 2019 might be different from that of 2017. It might possibly release prominent dissident Tran Huynh Duy Thuc and other prisoners of conscience. That might be proved before Trong’s trip to Washington D.C.