The outbreak of the coronavirus (2019-nCov) that started in the Chinese city of Wuhan (Hubei province) in late 2019 has been declared a global health emergency by the World Health Organization (WHO).

As of early February, the epidemic is estimated to have infected more than 24,500 people worldwide. The Chinese authorities have reported 490 deaths, mostly in Hubei province, and over 24,300 cases in total. The disease has now spread to 25 other countries and territories around the world. The response to an epidemic has the potential to affect the human rights of millions of people. First and foremost is the right to health, but there are several other rights at stake too.

“Censorship, discrimination and arbitrary detention have no place in the fight against the coronavirus epidemic,” said Nicholas Bequelin, Regional Director at Amnesty International. “Human rights violations hinder, rather than facilitate, responses to public health emergencies, and undercut their efficiency.”

The Chinese government has engaged in wide-ranging efforts to suppress information about the coronavirus and the dangers it posed to public health. In late December 2019, doctors in Wuhan shared with colleagues their fears about patients with symptoms similar to the severe acute respiratory syndrome (SARS) outbreak that began in southern China in 2002. They were immediately silenced and punished by the local authorities for “spreading rumours.”

“Chinese medical professionals in China tried to sound the alarm over the virus. Had the government not tried to minimise the danger, the world could have responded to the spreading virus in a more timely manner,” said Nicholas Bequelin.

Wuahn ophthalmologist Li Wenliang was among eight people reprimanded by police in December for “rumour-mongering” over the SARS-like virus. The infected doctor passed away on February 7. Photo: Li Wenliang.

In an online post made a month later, the Supreme People’s Court questioned the decision made by Wuhan authorities. It was widely seen as vindication for the doctors.

Yet efforts to minimise the severity of the outbreak were shared at the highest level of the Chinese government, as evidenced by China’s aggressive lobbying of the World Health Organisation not to declare the outbreak a global health emergency.

The right to health

The Wuhan medical system is now overwhelmed, and medical facilities and health professionals are struggling to cope with the scale of the outbreak.

Many patients are being turned away from hospitals after hours of queuing. Facilities do not have access to the necessary diagnostic tests.

“China must ensure that all people affected by the coronavirus have access to adequate health care, in Wuhan and elsewhere. Containing the epidemic is important, but so is prevention and treatment – which is why the right to health should be an integral part of the response,” said Nicholas Bequelin. “While the WHO has been unceasingly lavishing praise on China, the reality is that the government’s response was – and remains – highly problematic.”

Local media reported that people are unable to quickly get to hospitals because of a public transportation shutdown and, in some cases, unable to remove bodies of the diseased from their homes.

The right to health, as guaranteed under the Universal Declaration of Human Rights, provides for the right to access healthcare, the right to access information, the prohibition of discrimination in the provision of medical services, the freedom from non-consensual medical treatment and other important guarantees.

The Chinese authorities’ insistence on controlling the news narrative and stifling negative coverage has continued to drive censorship of sometimes legitimate information about the virus.

Numerous articles have been censored since the beginning of the crisis, including those by mainstream media organisations such as a subsidiary of Beijing Youth Daily and Caijing. 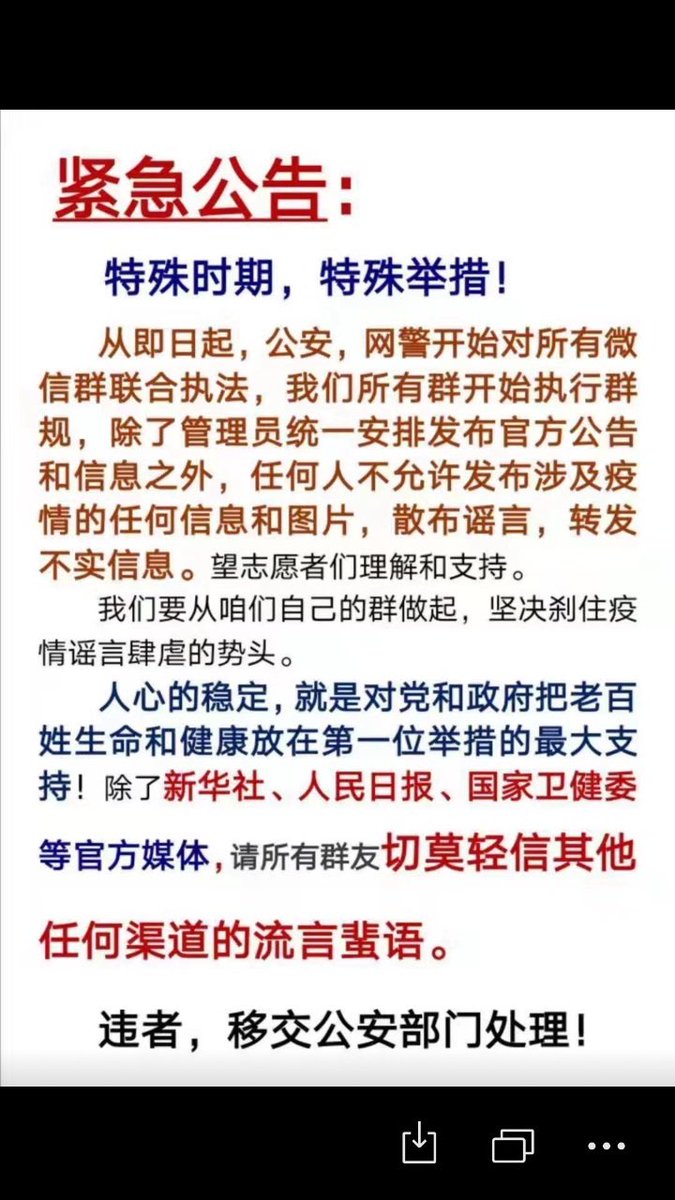 599 people are talking about this

“The Chinese authorities risk withholding information that could help the medical community tackle the coronavirus and help people protect themselves from being exposed to it,” said Nicholas Bequelin.

“The fact that some of this information is not available to everyone increases the risk of harm from the coronavirus and delays an effective response.”

People attempting to share information about the coronavirus on social media have also been targeted by the Chinese government. For example, outspoken lawyer and citizen journalist Chen Qiushi reported being harassed by the authorities after posting footage from hospitals in Wuhan.

Wuhan resident Fang Bin was also briefly taken away by authorities after posting a video purporting to show corpses of coronavirus victims.

“While refuting false claims about the virus is crucial, shutting down legitimate journalistic and social media content on the issue serves no public health purpose,” said Nicholas Bequelin.

As the virus has spread from China to neighbouring countries in South-East Asia, so has the trend of states seeking to control coverage of the story.

People have been arrested or fined in Malaysia, Thailand and Viet Nam for posting “fake news” about the outbreak.

“Governments must prevent disinformation and provide timely and accurate health guidance. However, any restrictions on freedom of expression must be proportionate, legitimate and necessary,” said Nicholas Bequelin.

“If governments in South-East Asia and elsewhere should take one lesson from China’s handling of the coronavirus crisis, it’s that limiting information and shutting down debate in the name of ‘stability’ carries grave risks and can be disastrously counter-productive.”

People from Wuhan – even those without symptoms – have been rejected from hotels, barricaded in their own flats and had their personal information leaked online in China, according to media reports.

There have also been widespread reports of anti-Chinese or anti-Asian xenophobia in other countries. Some restaurants in South Korea, Japan and Viet Nam have refused to accept Chinese customers, while Chinese guests were told by a group of protesters to leave a hotel in Indonesia. French and Australian newspapers have also been accused of racism in their reporting of the crisis.

Asian communities around the world have pushed back, and the Twitter hashtag #JeNeSuisPasUnVirus (I am not a virus) has trended in France.

“The Chinese government should take measures to protect people from discrimination, while governments around the world should take a zero-tolerance approach to the racist targeting of people of Chinese and Asian origin. The only way the world can fight this outbreak is through solidarity and cooperation across borders,” said Nicholas Bequelin.

Border controls and quarantines must be proportionate

In response to the virus, many countries have closed their doors to those traveling from China or other Asian countries, while others have imposed strict quarantine measures.

The Australian government has sent hundreds of Australians to an immigration detention centre on Christmas Island, where treatment conditions were previously described as “inhumane” by the Australian Medical Association because of the mental and physical suffering that occurred when refugees were detained there.

Papua New Guinea has closed its borders to people from all other Asian countries, not limited to those with confirmed cases of the coronavirus. This has left some Papua New Guinean students stranded in the Philippines after they were blocked from boarding a flight home on the instruction of the Papua New Guinea authorities.

Quarantines, which restrict the right to freedom of movement, maybe justified under international law only if they are proportionate, time-bound, undertaken for legitimate aims, strictly necessary, voluntary wherever possible and applied in a non-discriminatory way. Quarantines must be imposed in a safe and respectful manner. The rights of those under quarantine must be respected and protected, including ensuring access to health care, food, and other necessities.

“Governments are facing a challenging situation and must take measures both to prevent the spread of the coronavirus while ensuring that affected people have access to the health care they need,” said Nicholas Bequelin.