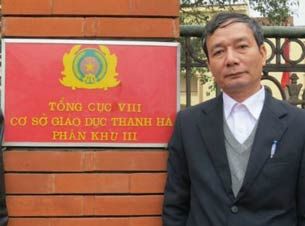 The Star, May 23, 2020
HANOI: Vietnamese police on Saturday (May 22) detained the acting president of the unsanctioned Independent Journalists Association of Vietnam (IJAVN) six months after the arrest of its president, a rights group and his family said.

Nguyen Tuong Thuy (pic), 68, was arrested on Saturday morning at his house in Hanoi on the charge of “conducting anti-state propaganda,” Defend the Defenders, a non-profit NGO working for the promotion of human rights and democracy as well as assisting local activists at risk in Vietnam, reported.

Thuy, a retired veteran and an active blogger, is renowned for commenting on the government’s policies and criticizing them for social injustice and corruption.

His family said a group of security officers blocked his private residence in Hanoi, confiscating the mobile phones of all members of the family, and started to search their house. Police seized his computers and other personal items and took him away.

“The recent arrests, including those of Mr Pham Thanh and Mr Nguyen Tuong Thuy, are part of the ongoing crackdown on local dissent prior to the party’s 13th National Congress slated in January 2021,” Vu Quoc Ngu, director of Defend the Defenders, said.

On Thursday, police arrested Pham Thanh, a former journalist for the Voice of Vietnam, on the same charge as Thuy.